Fed officials went into a full-court communications press as markets wobbled on fears the Fed might begin shuttering its bond-buying program. To counter these worries, Fed officials stressed that there is no rush to exit and that the program is not on “autopilot;” rather, bond purchases will be scaled up or down as future conditions warrant. In a speech before the Joint Economic Committee, Fed Chairman Ben Bernanke warned that premature tapering could stall the recovery and reiterated that any tightening of monetary policy would be cautious and considered.[2] While it’s good news that the Fed isn’t rushing for the exits, we can expect additional volatility in the coming months as markets prepare for the end of easy Fed money.

While markets reacted poorly to the Fed’s news, economic data last week was generally positive. The number of Americans applying for unemployment benefits fell last week, pointing to continued resilience in the jobs market despite the effects of sequestration. The improving employment picture is also propping up the housing market and consumer sentiment, with rising home prices supporting consumption and keeping Americans upbeat. The drop in unemployment claims erased most of the previous weeks’ increase and indicates that employers are not laying off workers despite the fiscal austerity.[3]

Markets will be very focused on the economy this week, as a number of important economic reports are due to be released, including: consumer confidence, revised Q1 GDP, housing reports, and weekly jobless claims. The Thursday jobs report, the last one before the June 7th release of the May jobs report, will be closely watched as traders look for clues about final May numbers. The May report is the next major milestone for the Fed since it has targeted a 6.5% unemployment rate as part of its mandate. If there is significant improvement over the 165,000 new jobs created in April, we can expect the Fed to look for confirmation over the next few months and begin to talk more seriously about tapering the bond program.[4] 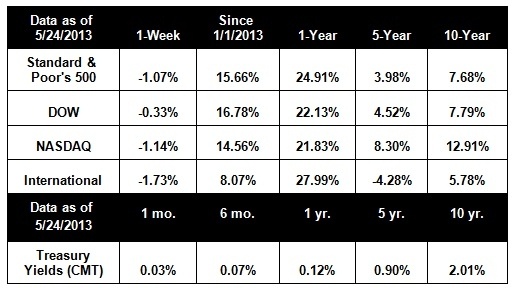