Markets rallied strongly for another week, posting their second best weekly performance of the year and sending the S&P 500 and Dow indexes to new highs. Earnings reports and calming words from Fed Chairman Ben Bernanke contributed to the market surge. For the week, the S&P 500 gained 2.96%, the Dow grew 2.17%, and the Nasdaq gained 3.47%.[1]

Second quarter earnings were in focus last week, and banks led the way. JP Morgan Chase (JPM) and Wells Fargo (WFC) both beat earnings expectations with in-line revenues, setting the bar for the rest of the financial sector.[2]  On the other hand, United Parcel Service Inc. (UPS.N) gave a weak profit outlook, citing economic conditions as one reason for the lack of optimism. Overall, analysts at Thomson Reuters expect earnings to grow 2.8% and revenue to grow 1.5% in the second quarter. [3]

Markets reacted positively to some reassurance from Ben Bernanke's speech Wednesday; the chairman pushed back against the idea that the Fed would definitely begin tapering asset purchases in September. He commented that current unemployment levels may be overstating the health of the job market and that rates may be kept low even after the 6.5% unemployment threshold is reached, should conditions merit. The June FOMC meeting minutes showed some dissension in the Fed ranks, underscoring the fact that some officials believe that the Fed should start tapering sooner than Bernanke may like.[4]  Either way, investors appear to have gotten their heads around the idea that tapering will definitely happen at some point in the future.

We've got a big week ahead as investors will be closely watching earnings to either confirm or deny the sustainability of the rally. It wouldn't be unusual to see some consolidation after such a strong run, but management teams have done a good job of setting investor expectations low and some earnings beats are expected. If earnings reports remain positive, we might see the rally continue, though some volatility is likely. Investors will also be closely watching the Fed as Ben Bernanke testifies before the House Financial Services Committee and Senate Banking Committee on the state of the economy. 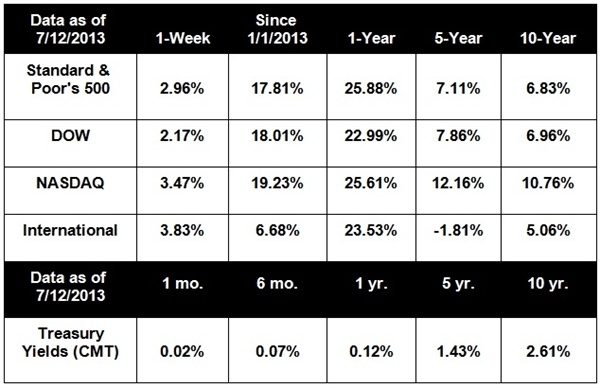 The Standard & Poor's 500 (S&P 500) is an unmanaged group of securities considered to be representative of the stock market in general.

The Dow Jones Industrial Average is a price-weighted average of 30 significant stocks traded on the New York Stock Exchange and the NASDAQ.

The Nasdaq is a computerized system that facilitates trading and provides price quotations on some 5,000 of the more actively traded over-the-counter stock.