February 25, 2013: Markets Decline Ahead of Sequestration

Markets slid last week as fears surrounding sequestration, Fed policy, and disappointing economic reports finally drained investor optimism. The S&P 500 snapped its seven-week winning streak, ending the week with a 0.28% loss; the Dow edged back into positive territory, closing up 0.13%, and the Nasdaq trimmed 0.95%.[i]

On the sequestration front, President Obama phoned up Speaker of the House John Boehner and Republican Senate Leader Mitch McConnell, but no announcement was forthcoming, indicating that the two sides are still at an impasse with just a few days remaining before the March 1 sequestration deadline.[ii] While it’s possible that both sides may come to an agreement before mandatory spending cuts strike, it's too early to know what the outcome will be.

Spending cuts would cause major disruptions to government activities and stop payments to some government-funded organizations (many of whom are in the defense sector.) While the total economic cost of sequestration is difficult to calculate, some analysts estimate that sequestration would contribute to the loss of 700,000 jobs (including drawdowns in the armed forces,) and shave 0.6% off of GDP this year.[iii] While these losses may not be catastrophic in terms of the overall economy, slower growth, increased unemployment, and reduced consumer confidence certainly won't help the economic recovery.

Investors also reacted negatively to last week’s Federal Open Market Committee (FOMC) January meeting minutes, which indicated that Fed stakeholders are concerned about the potential costs and risks of future assets, meaning that the Fed may be cutting short its quantitative easing initiative. Hopefully, we’ll find out more when Ben Bernanke speaks before the Senate Banking Committee on Tuesday and the House Financial Services Committee on Wednesday.[iv] Applications for jobless claims increased for the first time in three weeks, returning to pre-holiday season levels and showing little improvement.[v] While employment appears to be stable, some analysts have expressed concern that the pace of hiring is not picking up.

Bottom line: Equity markets may continue to respond nervously to the upcoming sequestration deadline, though a deal could lead to a market rally. As lawmakers tackle the country’s spending issues and the Fed clarifies future actions, we won't be surprised by continued volatility. In the meantime, we’ll keep you updated with news on sequestration talks and related issues. Should you have questions about how these matters affect your long-term financial plans, please feel free to reach out to us. We hope you have a great week! 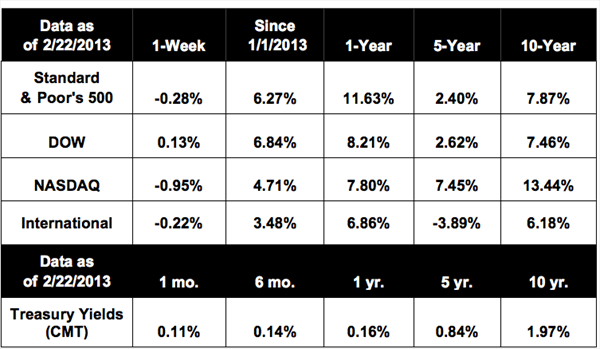